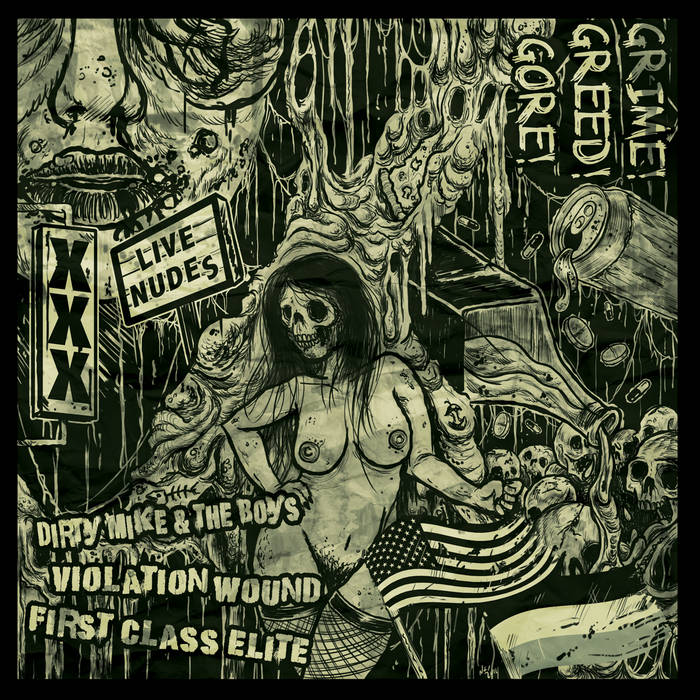 dale jacobson jr. Fantastic split.
Mike Nelson(DM&TB) vox is truely excellent on this.
Violation Wound & FCE are just as spectacular.
This split has gone under the radar.
CrossoverThrash/Punk formula works well on all levels here.
⭐👍

Grime! Greed! Gore! Dirty Mike & The Boys features current and former members of Phobia, Gravehill, Cobra Venom, Projeria, Excruciating Terror, Mange, Destroyed in Seconds and more. These sickos play real down and dirty Los Angeles Creep Noise (as "Dirty" Mike Abominator from Gravehill calls it), influenced by the sweet sounds of 80's Hardcore Punk, old school Grindcore and early 90's Power Violence. If there was ever a soundtrack to the seedy shit holes and back alleys of L.A., this is it! For fans of and Raw Power, Siege, Mob 47, Dayglo Abortions, Discharge, RKL, Septic Death, The Geto Boys, Sore Throat, Poison Idea, Circle Jerks, Hellnation, Crossed Out and S.O.B.

Violation Wound were born in a beer and whiskey soaked basement, driven by the burning desire to rip out a dose of 100% real Punk Rock. Nothing trendy, nothing wimpy, nothing pretentious... just quick-fire face melters fueled by aggression and kick ass riffs that burrow into your skin. Violation Wound consists of Chris Reifert (Autopsy, Death, Abscess), Joe Orterry and Matt O’Connell and have no interest in the modern, plastic or safe crap that passes off as Punk in these dismal days where haircuts and image are the main focus. They would rather honor the raw, dirty and pissed off ways of the original innovators, while carving out a path all their own. For fans of the Sex Pistols, Circle Jerks, The Exploited, Dead Kennedys, The Ramones, Motorhead, The Dead Boys, GG Allin and Eat My Fuk

First Class Elite hail from the Netherlands and exist out of anger from ripoff politicians and the breakdown of Dutch values in general. With a killer lineup that includes Bob Bagchus, Martin Van Drunen and Paul Baayens from Asphyx, FCE is intense Hardcore that harkens back to the days of original, old school crossover. Hard, raw and angry like a wild hog! For fans of Carnivore, S.O.D., Discharge, Nuclear Assault, Backfire and Black Sabbath. Features killer artwork from Nev... prepare for yourself for an onslaught of filth, sleaze and mayhem when Metal goes Punk!