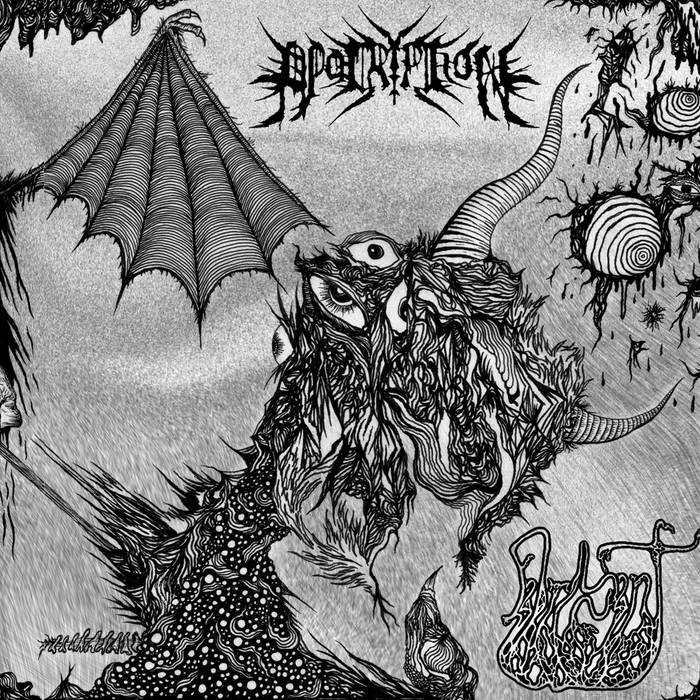 NightComesBloodBlack Blows me away how underrated and unknown Fabricant is, they fuck your mind and make you remember it. Favorite track: FABRICANT - Craving.

Making their Horror Pain Gore Death debut are two of the Bay Area's most promising new death metal bands, joining forces for a five song EP of jarring, psychedelic, grinding dissonance culled from the very darkest bowels of the human psyche! Apocryphon hails from the San Francisco/Oakland area and have established themselves as one of the most sought-after metal acts in the area since the release of their self-titled demo in 2011. Incorporating electronic noise, strange samples, insane drumming as well as angular riffs into their overall sound, Apocryphon has quickly gained a reputation as both brutal and bizarre. The recording present on this EP were some of the last to be completed by legendary engineer Jeff "Leppard" Davis before his untimely death in June of 2012, and stand as a testament to both his talent and integrity. For fans of early Cryptopsy, Death, Atheretic, Gigan and ayahuasca vision-quests. A killer debut!

Fabricant hail from the sleepy town of Lafayette, California, and display a flair for all things weird, technical, and ugly. Light-speed blastbeats, odd time signatures, and off-the-wall chord structures are all hallmarks of this young and hungry band, whose 2010 demo became a quick favorite in forward-thinking death metal circles. Still at the precipice of great and terrible things, Fabricant remain an unpredictable force to be reckoned with, showing unmatched imagination and brutality. For fans of Demilich, Embryonic Devourment, late-era Gorguts, Timeghoul and all manner of gruesome, dissonant deathgrind. This crushing split is powerful and a must have for all fans of the underground!